What is Industry 4.0? Here’s a Super Easy Explanation for Anyone

Home » News » What is Industry 4.0? Here’s a Super Easy Explanation for Anyone 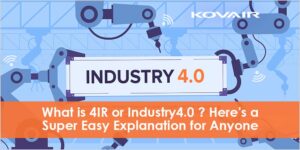 The industrial revolution has gone through many phases to reach where it is today. It began from the days of manually operated simple machines to hydro/steam-powered machines. The next revolution was the era of electricity-powered plants and today, industrialization has moved into a digital industrial era.

Manufacturing plants today are using AI technology, machine learning, robots, computers, and automated systems to improve production. The industry is becoming more self-reliant by producing its own energy or using green energy options. The speed of execution is now enormous and accuracy has never been as real like it is today. Here is Fourth Industrial Revolution (4IR) or industry 4.0 explained.

The journey that was taken by industrialization

Each phase of industrialization adopted a certain technology or new technologies for developers that made it unique. To reach where it is today, industrialization has undergone several major phases of development. The earliest was when mechanization started and water/steam power made production easier.

Many years later, electricity was created and it brought another revolution into industrialization. Production moved away from a few products at a time to mass production and thus a sudden boost to the economy globally. Another lengthy period passed and electronics came into the scene. It not only increased production but also accuracy and independent systems. Industrialists began to use technologies such as computers, IT, and automated systems.

An online service that provides technical writing help to students mentions that Industry 4.0 is still using resources used by its predecessors, such as electricity, electronics, IT, and automated systems. There is a major difference, though, because technology is growing very fast and the systems are becoming upgraded fast. Today, data handling and processing, automation, and manufacturing experiences are entirely different.

AI technology is helping businesses adopt the most practical ways of production. It is providing less dependency on human labor and becoming more central to production. Due to AI, industry 4.0 is crossing boundaries from a physical reliance on the input from humans to a digital production era that is highly vibrant, dependable, and independent.

The internet of things is another important technology that is revolutionizing industry 4.0. The greatest value that will be provided by IoT is the optimization of the internet which will boost productivity further. The technology will help businesses to collect big data, store it, and process it. It will help gain an increased edge processing and bring a balance between the edge and cloud.

Another major technology in industry 4.0 is the smart factory which is helping drive greater levels of intelligent manufacturing. It will integrate real-time data, predictive inventory, and the systems in purchase management. Ideally, it will help create a balance within the supply chain by aligning it with production.

Other emerging technologies in industry 4.0 are cognitive computing, smart manufacturing, cloud computing, and cyber-physical systems. These technologies are helping to create manufacturing systems where machines get augmented with wireless connectivity to help in monitoring and visualization of the entire production system.

The Germans have many times been at the forefront at every industrial revolution phase. After an initiative to make Germany a more competitive and industrialized country, the country called the phase ‘Industrie 4.0’ and the entire world adopted the term. The 4th revolution is characterized by several features.

The first and second industrial revolutions were characterized by a high level of unpredictability and a lack of transparency in the entire production and supply chain. Automation began with the third revolution and the 4th revolution is taking it to a higher level.

Automation provides a high level of predictability, accountability, and transparency through data collection from an intelligent system. The data provides accurate information of units produced, numbers rejected, rate of spillage, etc. There is accurate data from the time raw materials enter the system to the time finished goods arrive in the warehouse.

Once a product leaves the factory, the producer might not have control of which path it follows or where it ends up. It might end in the hands of a user nearby or another country many miles away. The manufacturer might not know the user experience with the product unless the user writes or calls to describe a good or a bad experience. This kind of communication is called one-way communication from the digital to the physical world where the product originated.

In the fourth revolution, communication becomes two-way, connecting the digital world to both ends – the factory and the user. For example, smartphones and cars can be built with software that sends feedback to the manufacturer from wherever the car or phone is being used. The manufacturer monitors the product and uses the data to improve on future products or improve the ones already in the market.

In an industry 4.0 scenario, customer needs are heterogeneous and this is creating excellent opportunities for producers to produce brands that are heterogeneous too. The products are also personalized, with each meeting the specific needs of customers in a certain niche. This helps sustain customers and also makes it hard for the product to be replicated because of significantly different attributes found in each product.

The fourth revolution can no longer rely on slow systems and lagged decision-making processes that hinder production. Instead, it must rely on machine learning to help businesses make quicker decisions, more informed responses, greater efficiency, and enhanced security.

The future of the industrial 4.0 revolution

The fourth revolution, dubbed industrial 4.0, is very promising. Some of its promises are already being experienced but others might take longer before the benefits trickle down to the consumers and economies. The most prominent promises of industrial 4.0 are as follows:

Production is not only expected to increase in terms of units produced daily but also improved product value. Technology will help mix the ingredients at the exact measure and the time taken will significantly be reduced.

Efficient systems will help reduce stress among employees, there will be a huge reduction in waste, and profitability will increase. Efficiency also helps increase transparency in the entire system and a thus higher level of accountability. Efficiency means less consumption of energy, fewer mistakes, and minimum waste, and thus more profit retention.

Experts are already predicting increased demand for skilled labor as the fourth revolution sets pace. According to reports, demand for engineers is expected to grow by 14 percent within a decade.

Demand for skilled labor is already taking shape in the areas of programming, data management, robotics, and IoT. There will also be demand for non-skilled and semi-skilled labor due to packaging, warehousing, cleaning, and delivery.

The wave of industrial 4.0 has already begun and many industrialists have already positioned themselves to tap into its potential. The revolution is precedent by an increase in technology in the areas of IoT, AI, machine learning, cloud computing, smart factories, and cognitive computing. The future of the fourth revolution is bright and highly promising. It is expected production will improve, systems will be more efficient, and it will offer more job opportunities and a boost to the economy.

This blog was originally written by Eun Rockwell for our partner Kovair Software. Contact us for more information.