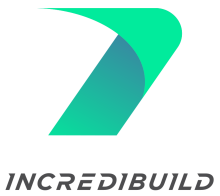 Wessem – 19 March 2021: Logic Technology, one of the Netherlands’ leading resellers of embedded systems development products has announced a partnership with Incredibuild, an Israeli company who focuses on cutting down build times for developers. Together they will focus on promoting Incredibuild’s build-accelerating product in the Benelux countries and German speaking countries.For developers, a lot of time goes to waste when the written programming code needs to be compiled. Waiting for a build to compile can take up to hours. With Incredibuild, this time is cut down significantly, as it accelerates build times up to 8 times. Software developing companies can save a lot of measurable time. Not only are employees working more efficiently, it also contributes to much quicker product release times.

With software complexity steadily increasing, hardware components are often the bottleneck when it comes to maintaining acceptable build times. A build that takes hours to compile is often scheduled for the night. Then, when you arrive at the office the next morning, you just hope that everything went well, otherwise another day is lost. On the other hand, when a team of developers can save a couple of minutes on their small, incremental builds, this will also lead to significant time saving on a daily basis.

“When a build that consists of multiple, concurrent processes is executed with Incredibuild, the processes are allocated to any idle CPU-cores that are in the companies’ on-premise or cloud network. By making efficient use of all the available computing power, build times are significantly lower”, says Gilles Hendrikx, product manager at Logic Technology.

Logic Technology and Incredibuild are a very good match. For more than 25 years Logic Technology has been working with European companies developing software and hardware.

Logic Technology provides companies who develop complex electronics with hardware, tools and software that speed up product development and increase the productivity of the developers as well as the quality of their output, allowing them to focus on what is really important: The creation of great products! Learn more at Logic Technology’s website.

Incredibuild turbocharges development with our Virtualized Distributed Processing™ technology that turns every host into a supercomputer with hundreds of cores. Incredibuild seamlessly distributes processes across idle processors in the network on-prem and dynamically allocates cloud capacity based on availability and cost. Using the same code, processes, and tools, developers and managers accelerate product development with 8x faster builds, 80% shorter release cycles, and 4x the number of iterations, consistently releasing better products to market radically faster.