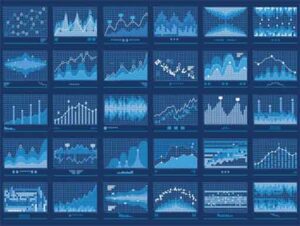 Our DBMS solution for High Performance Computing and Big Data is based on the blazingly fast storage engine for real-time systems, delivers scalability, low latency and advanced analytical capabilities for HPC workloads.

eXtremeDB HPC comes with a library of more than 100 functions for performing statistical analysis on time series data, such as grand, group, grid and window averages to name a few.

The pipelining of vector‐based statistical functions is key to eXtremeDB’s ability to accelerate performance when working with IoT and capital markets’ time series data. eXtremeDB’s extensive library of math functions are the building blocks that are assembled into pipelines to minimize data transfers and maximally exploit the CPU’s L1/L2/L3 cache. Don’t see the function your analytics require? No problem, write it yourself and use it alongside the built-in functions seamlessly.

eXtremeDB provides a set of libraries written in the C language that enables you to access databases from within any C or C++ program, and language bindings for Python, C#, Java, Scala, PHP, Rust and Lua, and a RESTful API for browser-based apps. Whether you prefer SQL or a native (nonSQL) API, eXtremeDB has you covered. Each language binding defines its own interface to access eXtremeDB databases. SQL and nonSQL APIs, and multiple programming languages can be used simultaneously with the same database.

Fast and flexible databases for embedded devices. Try it for yourself: